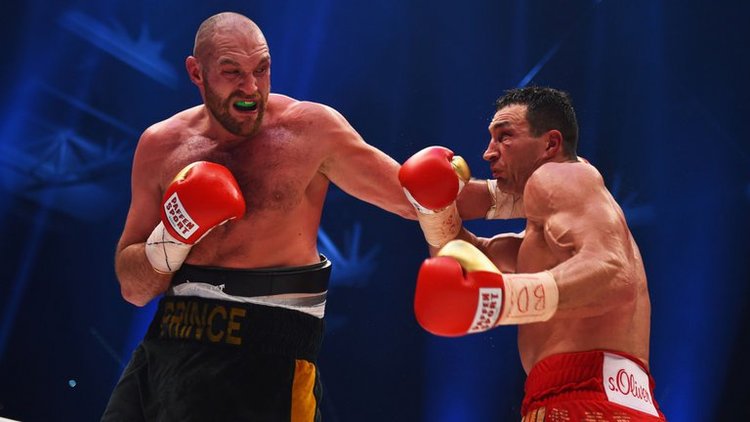 I must say I thoroughly enjoyed being part of the festivities at the recent Tyson Fury-Wladimir Klitschko heavyweight world title fight held at the ESPRIT arena, in Düsseldorf, Nordrhein-Westfalen, Germany. It reminded me at times of all of the hoopla surrounding my world title fights not too long ago. Of course the biggest difference between Klitschko and myself, was that I was the linear, universally recognized, undisputed heavyweight champion of the world. Whereas Klitschko held most of the title belts but not all of them. American Deontay Wilder still holds the WBC heavyweight world title belt.

I am not sure if fans could tell on their TV screens but sitting ringside it was easy to see that Klitschko looked very old in the ring and that his legs had no spring in them whatsoever. His legs were dead. This is why Klitschko was unable to move well in the ring. He looked slower and more robotic than usual. A boxer needs his legs to generate power on his shots, as well as to get him out of trouble and to create angles from which to throw his punches. Klitschko legs were unable to do any of these movements. He spent most of the fight, unsuccessfully trying to catch Fury, a much younger man.

Fury on the other hand was bouncing around the ring and had more spring in his step. Younger fighters often have better ring movement because they have stronger and livelier legs. Fury dominated Klitschko with his youth, superior reach, harder jab and contant movement. Fury had a huge advantage in that he only had to face one opponent – Klitschko. Klitschko had to face two opponents in the ring – Tyson Fury and Father Time, and Father Time has yet to lose a fight. When Father Time comes knocking on your door, it is time to call it a career.

It would be disingenuous to say that age did not play a factor in this fight. Fury entered the ring at the young age of 27 whereas Klitschko was 39 years of age on fight night. In professional boxing, being 39 is old, especially when you have been boxing most of your life and specifically, fighting in the heavyweight division. A heavyweight’s body can only take so much wear and tear before it is time to call it a career. Perhaps the hardest skill for any fighter to master is when to retire from the ring. I am glad I listened to my body and never went to the stage that Klitschko was at in his battle with Fury.

Klitschko demonstrated a certain lack of respect for those people in his corner. You must listen to your corner because they can see things during the round that the fighter is unable to see. However, it was abundantly clear that Jonathan Banks was clearly not getting through to Klitschko on any level. Klitschko was definitely somewhere else when he was in his corner between rounds. His mind was not focused on what his trainer Banks was telling him.

Klitschko has been using the same boxing style for many years now. Punch, punch, grab. That is Klitschko’s style. He’ll throw a jab, one more shot and then clinch. The problem with becoming too comfortable in one style is that eventually you will fight someone who has figured you out and how to beat your particular style. At that point, you better know how to adjust your style if you want to remain champion. Klitschko has always had trouble with taller guys and that was evident against Fury. In a rematch, Fury would most likely win by a knockout. Fury wobbled him in the ninth round.

There had been a lot of promotional antics leading up to the fight perpetrated by the Klitschkos. The Klitschkos have been successful at creating their own environment in the ring specifically geared to Wladimir’s success. For instance,  The Klitchskos were notorious for adding extra layers of foam underneath the canvas, which makes you feel as if you are boxing in quicksand. They did this to slow Fury down. The Klitschkos added eight extra inches of foam under the ring canvas for the Fury fight when the ABC (Associated Boxing Commissions) rules clearly state that you are only allowed two inches of foam underneath the ring canvas. This was done by the Klitschkos promotional company, K2 Promotions. They tried to do it for the Fury fight but did not get away with it because Fury was the mandatory challenger and threatened to not fight if they did.

When the extra layers of foam were removed from the underneath the canvas, Fury was able to move around much quicker than if the foam had been left in. I believe that K2 Promotions added that extra foam for when I fought Vitali. However, I had one-step quickness so that did not affect me as much as they thought it would. Boxers that are very quick on their feet and like to move, such as myself, like a fast canvas to work on. Also larger heavyweights such a myself require bigger rings to fight in. California, for instance has small rings for Mexican fighters because Mexican fighters traditionally like to slug it out in there and with a small ring you don’t have to look for your opponent. The size of a ring and the foam padding under the canvas often play a big part in determining the outcome of a fight. They sure did during the Fury-Klitschko bout.